This page examines the basic climate-related reasons why consumption of animal-sourced food products (even from grass-fed animals) must be drastically reduced as part of any viable food security strategy.

The report also notes that if the livestock sector were a country, it would be the second largest GHG emitter -- more than the United States and almost as much as China.

Livestock account for 37% of human-related methane production. Methane is important because it is a much stronger greenhouse gas. In technical terms, it has a higher global warming potential (GWP). *ref:2

Furthermore, methane has a much shorter lifespan (about 12 years compared to the hundreds for CO2). Thus, reducing methane production has a much more immediate impact. Given the dire nature of climate disruptions, the speed of change is a critical issue.

Animals are very inefficient converters of calories. They eat much more food (calories and protein) than they produce. (See the section below for details about the inefficiency of feed conversion ratios.)

Thus, all the land, water, energy, and processing used to produce plant foods is multiplied when we feed the plants to animals. The carbon footprint is further increased by meat-specific processes such as:

In short, the extra food that must be produced to raise animals, combined with the extra processing required to turn them into food, leads to much greater carbon dioxide and other GHG emissions.

It is widely accepted that animals consume more food than they produce. The differences occur around determining how much more food they consume and to what extent animal feed competes with food for people.

The numbers below represent Feed Conversion Ratios (FCRs) for grain-fed livestock. The chart demonstrates how much more food the animals consume than they produce.

Grain-fed and/or factory-farmed is the norm for the vast majority (>98%) of meat produced in the United States. See below for different concerns about grass-fed cattle.

The chart below indicates a reliable (though notable higher) set of FCRs. Click the link to find more details on Feed Conversion Ratios. 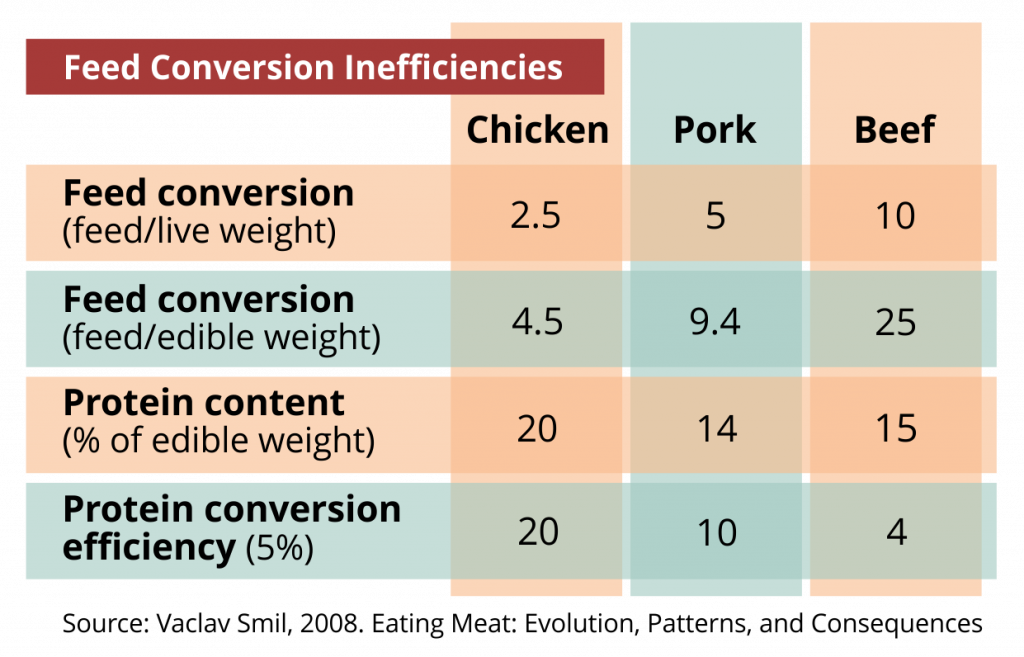 Since these ratios represent live weight, they will be further increased during the slaughter and packaging processes. The inefficiencies can more than double when liquid weight is removed - the weight of the water, blood, and other bodily fluids. Further weight loss occurs with the removal of bones and other non-consumable body parts.

Factors that affect the ratios include: type/quality/moisture of feed, animal age, breed, number of offspring, and a host of other variables.

Regardless of the exact numbers, raising grain (soy, corn, wheat, etc.) for animal feed is many times more resource-intensive and GHG-producing than raising food for direct human consumption.

As illustrated above in the CO2 section, meat-specific processes further multiply the GHG-impact.

The digestive processes in ruminant animals (such as cows, sheep, and goats) triple the methane production when consuming grass, hay, and other forage associated with grazing.

Proponents point to the carbon sequestration benefits of grazing, but given the strength of methane as a greenhouse gas (see above), the relatively small amount of carbon sequestration pales in comparison to the immense negative impact that methane has on climate change (especially given the half-life differences).

The negative impact of grass-fed cattle is furthered by the decrease in photosynthesis that occurs when trees are cleared for grazing land. Photosynthesis is a powerful way to proactively reduce GHGs already in the air (not just reduce the amount of new GHGs put in the air).

Recommendations for grazing give more than two acres per cow. While not all that land is tree-bearing, deforestation is a dangerous reality. Some proponents also point to the use of marginal land, but marginal land is a small minority of land used for grazing.

According to the UN's Livestock's Long Shadow:

"Livestock now use 30 percent of the earth's entire land surface, mostly permanent pasture but also including 33 percent of the global arable land used to producing feed for livestock, the report notes. As forests are cleared to create new pastures, it is a major driver of deforestation, especially in Latin America where, for example, some 70 percent of former forests in the Amazon have been turned over to grazing."

Finally, public perception and greenwashing are key concerns. Grass-fed beef only accounts for 3% of beef production in the U.S., yet it is often referred to as the viable replacement by advocates and used as an "excuse" to eat beef by individuals (even though other forms of beef and other meat are also frequently consumed). *ref:7

Greenwashing occurs, when the public is mislead about fully grass-fed versus partially grass-fed but grain-finished. Even if unintentional, it can also be argued that overstating the environmental benefits of grass-fed beef (such as omitting the climate consequences) is itself a form of greenwashing.

Statistics vary greatly based on which components are measured, how they are measured, predispositions of researchers, and a host of other variables. As such, we strive for transparency and use ranges for statistics as appropriate.

Regardless of the specific calculation, there is agreement that there are immense benefits for the climate and other environmental concerns in reducing the consumption of animal-sourced foods.

Our recommendation is to minimize (ideally eliminate) animal-sourced foods.

The term "minimize" is used to reflect the realities of culture, economics, and food security in particular areas, while still promoting the most reduction possible. Ideally, eliminating all animal-sourced foods for those who can.

Similarly, regardless of the final number used for FCRs, it is an immense waste of limited resources, especially in an increasingly populous world. *ref:5,3,3

Even poultry, which consume "only" twice as much food as they produce, are two-fold wasteful. Poultry only seem efficient because they're compared to large mammals. Further, the feed convertor inefficiencies do not include the additional land, water, and energy used in all livestock production.

Finally, grass-fed beef is not the answer. Grazing increases methane emissions and the deforestation causes a great loss in photosynthetic capacity is lost.

Even more so, there are massive amounts of grazing land currently in use that could regenerate and increase photosynthetic (thus carbon-capturing) capacity if grazing was decreased.

As a side-note, locally-produced meat is also an inadequate alternative.

According to research by the University of Iowa, transportation only accounts for 11% of the carbon food print. This is not nearly enough to counter the inherent resource-intensive and climate-unfriendly nature of producing animal-sourced foods. The majority of carbon stems from production, processing and preparation, not transportation. *ref:4

To be clear, the point is not to dismiss alternatives to and critiques of factory farming systems. The point is to demonstrate the immense benefits of minimizing the consumption animal-sourced foods (regardless of production methods) as part of any environmental, social or food justice actions.

3. "Review of the Nutrient Efficiency in Different Breeds of Farm Livestock." Scientific Advisory Council for the UK Department of Energy, Food, and Rural Affairs. April 30, 2010. - PDF