Despite the growing popularity of plant-based foods, global meat consumption has been sharply increasing for more than half a century.* Left unchecked, it will continue its dramatic rise with dire consequences. 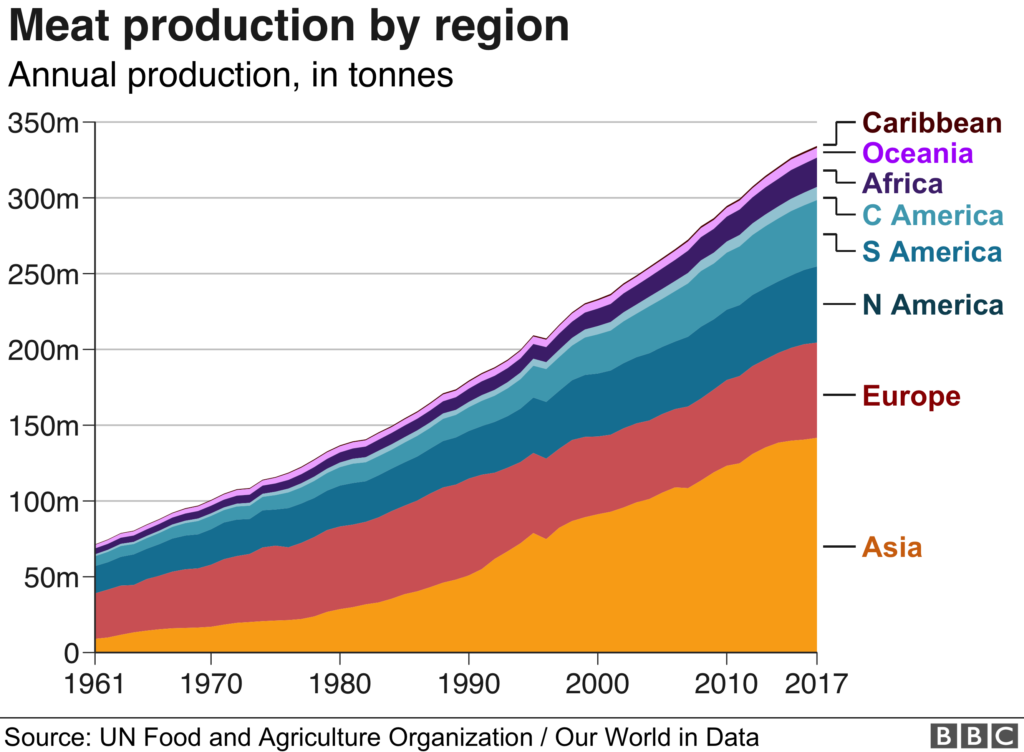 In terms of number of land animals, this increases the 50 billion animals reared and slaughtered annually (five million/hour) in the year 2000 to 120 billion animals in 2050 (an increase of 240%).

The number of land animals more than doubles because the consumption of poultry is growing at a higher rate than the consumption of mammals. Since birds are smaller and weigh less than mammals consumed for food, it requires more animals to produce the same amount of meat by weight.

As of 2019, the predicted trend is on course with 75-80 billion land animals reared annually for meat, dairy, and eggs.

The United States is the largest per capita meat consuming country. With an annual slaughter count around 10 billion land animals, the U.S. is responsible for a disproportionate amount of consumption and global impact. The upside is that individuals and institutions in high-consuming countries, can have immense impact through reductions and reduction-encouraging policies.

Coined in 1999 in the International Food Policy and Resource Institute’s (IFPRI) Livestock to 2020 report, the “Livestock Revolution” specifically refers to the increases in meat and dairy consumption stemming from low- and middle-income “emerging” countries.

When lower income populations gain financially, they consume more animal-sourced foods. These emerging economies represent nearly half the world’s population. Add to this the relatively high birth rates of many countries, and the resulting aggregate consumption increases create a steep and dangerous upward trend.

The “Livestock Revolution,” consists of:

IFPRI warned of the dangers of increasing meat and dairy consumption. Unfortunately, like many others, their supply-side solutions focused on increasing crop yield and mitigating environmental harm through technological fixes.

At the time, IFPRI discounted “well-meaning development partners” advocating for reduced meat and dairy consumption to be included as pieces of the equation because they deemed the trend “demand-driven.”

As referenced above, the “Livestock Revolution” and other works that focus on the dangers of “increasing” meat and dairy consumption are important in understanding global trends.

In terms of creating global change, however, it is imperative to also consider the impact of current high levels of animal-sourced food consumption among high-income and/or high-consuming populations.

For the high-income, high-consuming countries to have legitimacy when seeking global reforms for food security or the environment, policies and recommendations for other countries must also be combined with domestic reform efforts.

It’s too convenient for powerful and wealthy global actors to push others to change (diet, population growth, etc), without also improving/decreasing their own (over)consumption.

Decreasing meat and dairy consumption among food-secure, high consuming populations has tangible global benefits in that there is greater room for decreases, so the impact is more immediate.

It also sets a good example. To the extent that increases in animal consumption stem from their association with wealth and well-being, these associations can be reversed. Instead of celebrating animal consumption as economies improve, nutritious plant-based diets could be embraced for their public health and environmental benefits.

To focus on increases in consumption to the neglect of current high rates of consumption is bias and counter-productive.

When measured by percentage, low level consumers appear to have higher levels of growth, which can be misleading if the numbers aren’t understood in context.

Meanwhile, if the United States has an initial per capita meat consumption level of 10 and it also increases by 2, it would only be a 20% increase.

Or if there’s a decrease from 10 to 9, the U.S. could (and has) boasted a 10% reduction, while criticizing China for doubling their meat consumption.

So while it could be framed that China’s meat consumption has doubled, while the U.S. consumption only grew 20% or decreased 10%, it would be appropriate to highlight that the U.S. per capita consumption would still be 3x higher than China.

Outside of this example, in real terms, the U.S. and China have similar levels of meat consumption at the country level. However, because China is about 4x larger than the U.S. (in 2019), the United States has a per capita consumption rate 4x higher than China.

With China’s much lower per capita meat consumption, the United States lacks moral authority in seeking reductions from China (or others).

KEY TAKEAWAY: Looking only at the percentage of growth is misleading and bias against lower level consumers.

A Well-Fed World urges elevating the promotion of plant-based foods as key components of global hunger reduction and global food security efforts. Instead of assuming that increased consumption of animal-sourced foods is a given or inherently beneficial to undernourished populations, plant-based solutions should be given unbiased consideration. In populations where there are already high levels of animal-sourced food consumption, reduction measures should be swiftly and broadly implemented.