Animals Are Inefficient Converters of Food

That farmed animals consume more food than they produce is undisputed.

The question is not “IF” animals are inefficient food converters, but “HOW” inefficient are they?

How much food (calories, protein, and nutrients) is lost by cycling crops through animals for meat versus eating a plant-based diet directly? And what are the consequences to food security, personal health, and the planet?

What Are Feed Conversion Ratios?

Feed Conversion Ratios (FCRs) measure the amount of feed/crops needed to produce a unit of meat.

FCRs and related issues are generally discussed in terms of “efficiency.”

For example, chickens are more efficient converters crops than cows. They have a lower FCR, meaning that it takes less feed to create a pound of chicken than a pound of beef.

However, given the inherent loss of crops and natural resources involved in producing meat and other animal sourced foods (ASF), “inefficiency” is a far more accurate term.

For example, cows are far more inefficient than chickens in terms of feed ratios. Unfortunately, (spoiler alert) chickens are still very inefficient in that they consume more than twice as many calories and protein than they produce.

This is an example of the importance of language. Producing meat is inherently inefficient, but since the livestock industry creates much of the language (and math), they are able skew public perception.

For practical reasons, feed ratios are generally assigned based on animal species (see below).

We also use these shortcuts for illustrative purposes, while acknowledging that there is wide variation in the actual FCRs of particular animals based on age, breed, internal and external environment, type of feed, and a multitude of other factors.

As interdisciplinary scientist Valcav Smil explains, “definite rate is valid only for a particular animal, herd, or flock.” (p.146)

The section below explains some of the factors that produce vastly different published numbers and makes recommendations based on the most useful measures.

The calculations represent FCRs for crop-fed farmed animals. In other words, how much more food each animal consumes than they produce. Typical feed crops are grains and legumes: corn, soy, and wheat.

These numbers are important as crop-fed, factory/conventionally-farmed animals are the norm in industrialized countries and the global growth-rate of meat is alarmingly high. Intensive (factory) farming represents the overwhelming majority (>98%) of meat produced in the United States.

Live weight FCRs – will have lower ratios because they represent the number of pounds in crop that animals consume to gain one pound while they are alive.

Edible weight FCRs – will have higher ratios because they more accurately represent the amount ready-to-eat of meat produced after slaughter and processing.

Even with edible weight, there will be variations such as carcass/hanging weight and final/take-home (which is roughly half of live weight for pigs and one-third for cows — thus doubling and tripling the inefficiency ratios — more when boneless). See detailed chart.

Most of the caloric energy animals consume is used to fuel their metabolism and to form bones, cartilage, feathers, fluids, and other non-edible parts. Thus, the inefficiencies more than double when liquid weight is removed – the weight of the water, blood, and other bodily fluids. Further weight loss occurs with the removal of bones and other non-consumable body parts.

Often times, the food industry will publish the low end FCRs, which minimizes the perceived waste. Those without a vested interest in animal agriculture and/or industry critics are more likely to publish the higher (more accurate) post-processing carcass or boneless numbers.

Even if method is held constant, there will be a variation in FCRs. Other factors that affect FCRs include: type/quality/moisture of feed, animal age, breed, activity level, number of offspring, and a host of other variables.

There is a great deal of focus on improving these factors in reduce inefficiencies, but the inherent waste of cycling crops through animals remains. Adjusting these factors merely shaves down some of the numbers without addressing the core issue that feeding animals to produce food is a massive net loss of available global calories and protein.

Consider how telling it is that a 2:1 loss of food crops is considered very efficient and cause to celebrate. When we talk food waste, would we consider losing half of all crops “good?” 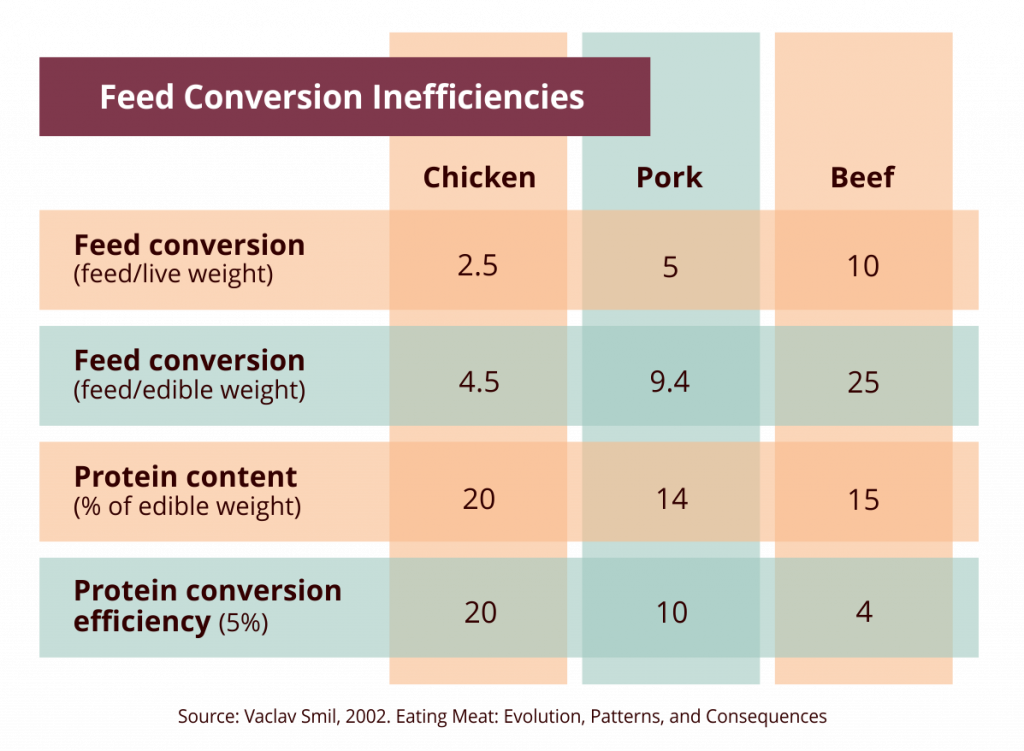 Percent/Units of Edible Output per 100 Units of Feed

New, more comprehensive methods show that even the high-end of commonly cited FCRs are highly conservative.

In other words, what portion of plant energy dedicated to raising animals becomes edible calories in the form of meat, dairy, and eggs. This method looks beyond costs associated with a single animal and instead at the energy flows in the broader food system.

By calculating the fates and flows of phytomass energy on a macro scale, it is possible to track how and where food energy is being wasted in the production of various food products.

The inefficiencies expressed as “units of edible output per 100 units of feed input,” are lower than the previous feed conversion calculations because they are based on energy flows from plant phytomass to edible animal parts. For example, they factor in feed that gets wasted before it reaches livestock animals, the plant mass that goes to non-feed purposes such as bedding, the energy grass and other forage that goes into feeding livestock, and the energy needed to support animal production beyond just producing animals.

Many animals involved in livestock production do not directly produce food, such as animals that are inevitably culled, that die before reaching maturity, and that are used in breeding. (Stefan Wirsenius, Human Use of Land and Organic Materials, 2000)

Wirsenius’s work takes a macro look at the food system, calculating how much phytomass is appropriated for food production in the form of pasture and cropland, related to how much food is produced. This method is helpful because it gets at the total food energy that into animal agriculture as a system.

According to previous estimates, over two-thirds of phytomass energy appropriation is dedicated to farmed animal production, despite that the sector only produces about 13% of total food calories.

In the same way that one can get an accurate estimate of how much a college education will cost by including the cost of housing, supplies, and other living expenses with the cost of tuition, so too can one get a more accurate estimate of the inefficiency with which farmed animals convert plants to animal sourced foods by considering the feed needs (including pasture and grain) of the animal agriculture sub-sectors.

Another strength in Wirsenius’s method is that, unlike the previous feed conversion methods that only calculate conversions in terms of feed such as soy or corn, it also factors grass and forage into its calculations.

Grain weight is easier to quantify since producers tend to purchase and feed it to animals in given weights, whereas the amount of grass and forage animals consume on pasture can only be roughly estimated.

In this gross energy calculation that looks at all phytomass appropriation involved in food production, pasture land is the largest source of phytomass energy. This, combined with the inherent feed conversion inefficiencies of cattle, are one of the reasons why beef production is one of the least efficient forms of food production.

While phytomass that is not edible to humans is often discounted in determining the crop costs and opportunity costs of using animals for food, much of the land cleared for pasture could also be used for crop production, so it should be thought of as forgone plant-based food production. There are also significant environmental impacts related to clearing wilderness areas for pasture land.

But even if we were to adjust these calculations to remove the phytomass energy derived from non-edible material, such as grass on open pasture or the straw that is used as bedding in some animal operations, there would still be a dramatic difference in the quantity of food that can be yielded as edible calories for human consumption from livestock food and from plant-based protein alternatives.

Regardless of the exact numbers, producing crops (soy, corn, wheat, etc.) for animal feed is many times more resource-intensive than using crops for direct human consumption. While there are perilous trade-offs related to fuel vs. food, a more serious concern for a variety of reasons is feed vs. food.

With 75% of all agricultural land used for animal production—and more than a third of global calories and half of global protein inefficiently used as animal feed —the impact of increasing global meat consumption is monumental. (ERL p.2-3)

For more on the opportunity costs of animal agriculture, please see: Cassidy’s “Redefining Agricultural Yields: From Tonnes to People Nourished Per Hectare.”

From the Vegetarian Resource Group

“[F]eed is not synonymous with “concentrates” such as grains and legumes. Some USDA tables may use “as-fed” feed values which means the moisture content of the feed (which may vary between 7 and 70% of the feed weight itself) is included. Similar tables found in other sources may be based on ‘dry matter weight’ which excludes all weight of the feedstuff due to water.”

“A large portion of the diets of ruminant livestock, including cattle, sheep and goats, consists of feedstuffs that are not edible by humans such as pasture, hay and crop residues (i.e., corn stalks). In some regions of the world, ruminants subsist entirely on these. However, most ruminant livestock produced under intensive conditions, (i.e., feedlots), do spend a significant part of their life eating grains and soybean byproducts, such as soybean meal and soybean oil, that are human-edible.”

“The situation is different with monogastric livestock, (i.e., animals with one stomach), such as hogs and poultry. Under intensive rearing conditions that are common in the United States, their diet consists almost exclusively of human-edible grains and legumes. So for these species, their feed is almost all grain and legume.”