The Dark Side of Animal “Gifts” 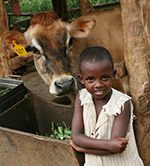 This girl and cow photo is from the Heifer International website.  Photos of happy children and healthy animals represent standard advertising used by animal-giving organizations.

The misleading ways in which children are used to promote the giving of animals for food should be a top concern for potential donors.

You won’t see emaciated animals or slaughter photos on the Heifer International website.  They represent the reality of what many animals in low-income countries actually suffer.

Animals eat far more than they produce. While there are rare exceptions when animals consume grass or other foods not fit for human consumption, all animals require water and many require medical care that is either out of the reach of poor families or strains their limited resources. And for ruminants and other animals that consume grass and insects, it’s important to realize that even grass and insects are a limited resource. 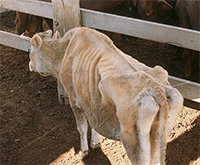 The Impact of Animal “Gifts”

Giving animals for food is much more controversial than it first seems. As far back as the 1960s, Paul Erlich and Frances Moore Lappe warned that U.S.-led efforts to promote more animal husbandry in the “under-developed” world were deeply misguided.

In the words of the World Land Trust, giving animals can be ‘environmentally unsound and economically disastrous.’

Even if there is little or no initial investment to acquire animals, raising animals takes a great deal of knowledge and financial resources.

All farmed animals require proper nourishment, large quantities of water (cows can drink up to 90 liters per day), shelter from weather extremes, and medical care.

Such resources can be in critically short supply in places such as Africa (a major recipient of animal-giving charities). Depending on the animal and location, the price of feed alone can exceed the slaughter price. Many recipients of “gift animals” are unable to feed them to maturity, let alone feed and care for their offspring.

Some environmentalists raise questions about the wisdom of introducing non-native livestock to often fragile habitats, where animals with larger or different appetites from the indigenous strains might overtax the vegetation or simply starve. Furthermore, extra animals can reduce the amount of farmland available to local people and exacerbate desertification.

In our research, we found that recipients are not just low-income, rural communities. While rebuilding after WWII, Japan was the recipient of Heifer International programs.

Heifer International’s work in Japan is widely viewed as the start of their modern factory-style dairy industry. In addition to the massive number of animals who suffered factory farm and slaughterhouse atrocities, the increased consumption of animal fat led to significant health issues for the Japanese people.

If adding animals from one animal-giving group helped fuel a cultural shift and factory farming with it, the consequences are even more dire than most critics realize.

Our gift-giving campaign Plants-4-Hunger provides a compassionate and effective alternative.

Read about our 4 top choices for this year’s holiday campaigns. 100% of gift donations to go directly the groups.